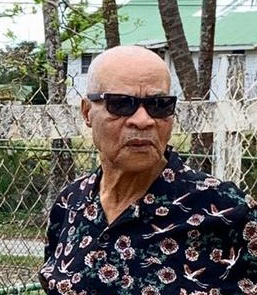 Son of the late Charles and Maude Thompson;

Uncle of Peter Hackett, Theron, Maria and Ilma Turner, Rachel McKinnon, Diana and Tyrone Howard and many others;

Cousin of Patrick Jordan, Patsy Browne, Jennifer McCollin, Stafford Daniel and many others;

Relative of the Thompson, Jordan and Howard families;

The funeral of the late Frederick Johnson leaves Downes & Wilson Funeral Home, Eagle Hall, St. Michael on Friday, March 20, 2020 for Holy cross Anglican Church, Society, St. John where relatives and friends are asked to meet at 3:30 p.m. for the Service; followed by the interment in the Churchyard.

The Organist and members of the Church Choir are kindly asked to attend. Wreaths may be sent to Downes and Wilson Funeral Home, Eagle Hall, St. Michael, Friday, March 20, 2020 no later than 1 p.m.

Relatives and friends may pay their last respects at Downes & Wilson Funeral Home on Thursday, March 19, 2020 from 4 p.m. to 6 p.m.